Hello awesome, nice to meet you.

May/2007: Wow, am I tired. I'm trying not to go to sleep because going to sleep at six AM isn't really the best thing to do for your productivity. In fact, in case you didn't know, when you go to bed at six AM, you wake up at like two PM. By the time you stop blinking and thinking "Wait... it's two PM" it's four PM. At that point, it's fuckin' four PM, mate.

That's not a good way to spend your days. The problem is that my sleep schedule is not something I can control all that well. I suck at staying up more than 18 hours at a time. That's what happens when you get old.

So, I'm tired. I'm trying not to sleep. I figured hell, why not write a boring blog about WHY you're so tired. That, perhaps, may wake me up. Of course, the chances of something as exciting as writing a blog being invigorating enough to rouse you from a track towards slumber is... uh... yeah, probably isn't going to happen.

Anyways, I'm tired because I've discovered perhaps the greatest discovery since I discovered a few months ago that non-stick woks are really cool for cooking almost anything. I discovered this new discovery last Saturday night. I was awake, bored, and decided to go to the gym at two AM.

You know those scenes in movies where the guy leaves his house and he goes into the street and there's nobody there? And there's nobody for miles? There's just fuckin' nobody and he's pretty much the last person standing? Yeah, that really cool scene where I know you were looking at the screen and thinking "Why isn't this guy going to the grocery store or Best Buy or something?" 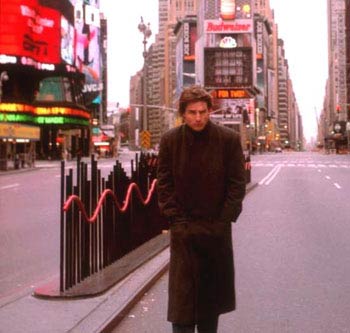 That scene is my local gym at two AM in the morning. It is awesome. Last Saturday, I walked in and the clerk who is supposed to scan me in was sleeping. Now, I had never quite seen that before. I really hadn't ever run that scenario through my mind of what to do if the gym clerk is oh, sleeping. So I stood there for about thirty seconds until I figured it would be a really heel move to wake her up just to scan me in. I entered the place and it... was... that... scene.

There was nobody there.

It would surprise none who know me that I found this event to be one of the neatest feelings possible. A dream come true. The general public vanished. It WAS that scene from the movie. So I treadmilled for an hour and a half while watching the rest of "A Beautiful Mind" (WHICH, btw, I had not seen before and I knew nothing of the whole mental angle that comes in. Nice surprise, that.) on my fifty dollar Zune (I love my Zune, btw again). I looked around after being done with that... there's still nobody there. Not a person. The clerk looked like she was still sleeping.

Of course, after I was done with all that and leaving around four-thirty AM, there were two other people there and the clerk had awoken. But no matter. I lived that scene, if only for a small window in time, and it was awesome.

So, I went back last night. At two AM.

Same. Situation. Well, except that the gym clerk was a different person BUT... HE was asleep when I got there. Oh, and I watched the first two-thirds of "Walk the Line", yet another movie I haven't seen all of. Oh, and I played some basketball afterwards because I stayed longer than last week. But otherwise, exactly the same. That same cool as hell feeling of living that scene.

Hello awesome, your name is the feeling of the empty gym.

At long last, the return of...

May/2007: The Internet has missed many things over the last six months or so, but nothing it has missed is more missed (by me) than... posting creepy pedo emails! Yes!

Okay, so perhaps there are better things on the 'net but I submit that my posting creepy pedo emails rates at least in the top 100 of all things on the Internet. Of course, since humanity has turned the Internet into mostly a vast rotting carcass of garbage, that's probably not much to brag about.

But screw the intro, it's creepy pedo email time!

Also, do you ever go after female predators? After all, they are out there. Especially female school teachers.

If human cloning were possible, would having sex with my clone while it was a child make me a pedophile?

If I want to have sex with an aborted fetus, does that make me a pedophile?

I hadn't actually received a piece of pedo-inanity in quite a while, so it was quite the pleasant surprise to receive yet another sterling piece of pedophile trash in the ol' email literally a couple days after reopening my blog. Good timing, creepy pedo emailer!

Anyways, he did indeed throw down the gauntlet. He said ANSWER THEM IF YOU CAN. In big letters, just like that. That's the gauntlet. Big letter email challenge = definition of the gauntlet.

I SHALL ANSWER THEM BECAUSE I CAN (That's how you return said gauntlet with gauntlet of your own).

Have one of your online decoys ever had an explicit chat with a teenage boy or girl pretending to be an adult?

No. Hey, that was pretty easy.

Has one of those teenagers ever shown up for the sting operation?

Wait a second, I have no way to answer that. Asking a question which presupposes the answer to the previous question is just bad form in creepy question asking. Of course, asking someone who is attracted to children of all things to understand the protocol of asking question is probably too much to ask.

If so, what happened to the teenager posing as an adult?

See last question. Asking a question which presupposes the answer to a question two questions ago is very, very stupid.

Have any of the online predators ever sent a decoy of their own to the sting operation?

No. Gee, another easy one.

What happens if the person who shows up to the sting operation isn't the same person who participated in the online chat?

We do a rain dance and sing hullaballoo, hullaballoo. Actually, ask us if that ever happens (Note: It won't happen. Ever.).

Also, do you ever go after female predators? After all, they are out there. Especially female school teachers.

No, we don't go after them, we actually hide them in a secret bunker and have them work on complex mathematical equations. You see, the website Perverted-Justice.com is actually a secret front organization for a group of mad mathematicians who seek to win the Fields medal but are actually far too lazy to do so. Hence, these mad mathematicians who are secretly behind everything we do actually have us go out and troll, no, not to get predators arrested, but to have the millions of female predators who have hit on us enslaved to sit in mathematical sweatshops working on complex equations in order to make a tremendous breakthrough. Pretty clever no? Of course, it's probably more work than if the secret mathematicians just did the equations themselves, but like I said, they're mad. And lazy.

There, secret revealed, everyone can stop asking us that stupid question now.

If time travel were possible and I went back in time and had sex with myself as a child, would that make me a pedophile?

Would it be okay for me to go back in time and fuck my wife when she was 13?

No. Wow, another really easy question.

Would it be okay for my wife to go back in time and fuck me when I was 13?

And here's where I knew I was going to post this email. This is perhaps the most classic pedo line of all pedo lines I've ever received. He asks, quite stupidly, if it were okay for him to go back in time and have sex with a thirteen year old who would later become his wife. Of course, we're going to say no. But no, that's not the notable part of this.

This is why pedophiles are creepy. Not only because of the whole disgusting and disturbing "kid thing", but because their brains work so poorly that they actually think "hey, might be a different answer to the second question."

Would that make either myself or my wife a pedophile?

Yes, you would both be pedophiles if you had sex with a thirteen year old. That's a really, really easy question.

If human cloning were possible, would having sex with my clone while it was a child make me a pedophile?

Now that we've informed the internet of this news, may they now know that they should not have sex with children.

No, actually. But sending me a lot of stupid questions trying to come up with scenarios where it's okay for a grown person to have sex with children does make you a pedophile.

If I want to have sex with an aborted fetus, does that make me a pedophile?

Your welcome, thank YOU for giving me another opportunity to show the Internet just how creepy people on the 'net can be. Congratulations for helping to educate random people on just how scummy humans can really be.

May/2007: For a couple years I've been sporadically doing something called "Xavier's Lesson of the Moment." Basically back in the day I was thumbing through some golden age comic books online and noticed this weird government propaganda. The government created the National Social Welfare Assembly to insert social and political propaganda into comic books in order to well... influence developing minds, really.

Some of them are quite audacious, lionizing political figures, etc, etc. Some are just ludicrous snapshots of an earlier time. Instead of just posting them on the forums and having people tell us what they've learned from it, I'll be posting them on the blog and will have people leave comments about what they've learned from the current lesson of the moment!

This month's lesson of the moment features Buzzy! He's one of the governments recurring characters to TEACH you how to be.

What did YOU learn from today's lesson? Leave your answer with the comment link!