June/2007: Hey you! Look at the following picture! 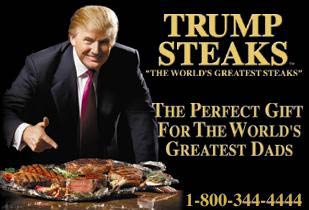 Does this make you want to eat meat?

Simple question and answer, eh? Donald Trump rocking the Satan-face standing over some meat with his finger pointed down like he's saying "I just hit that" isn't very appetizing. I get the Sharper Image catalog because I bought an AWESOME PERSONAL FAN THAT ALSO MISTS WATER WHEN YOU CLICK IT (that deserves caps, yes it does) and I always flip through it. So imagine my surprise when I flipped to a page to see the very image at the top of this blog, in full glossy stock, staring back at me. I just about dropped the fucking thing, it was that disturbing.

No, you see, Donald Trump thinks a lot of his meat. He's priced his meat at a level that... I can't even imagine the type of person that would have the cash to actually buy his meat. Nor can I imagine why they'd want to, but seriously, check out Donald Trump's costly meat, you know you want to.

The "Cheap" Deal
Let's say you're just a cheapass like I am and you don't want to pay that much for The Don's slabs of meat. Well, you can go cheap. Donald won't share much of his meat with you, but you'll at least get a little. The cheap (aka "classic collection") follows...

Price? 199 dollars. Yeah, you get two small ass steaks, two steaks with giant bones in them, and twelve chinsy-style burgers for two hundred bucks. That, yes that, is some expensive f'n meat.

But wait, if you think THAT is a deal, let me pretend like I'm trying out for the Apprentice and pitch you some more in the great salesman-I-am-of-Trump's-Meat-that-I-am style I have going on.

Let's say you don't want just a little of his meat, you want a lot of it. Well, I can't blame you. What meat! Let's say you want the full monty of his meat. The entire enchilada. All of his meat served to you in a nice big package. Yes, you can buy the expensive (aka "Connoisseur Collection") as hell assortment. That includes...

Of course, the price? 999 dollars. The thing that gets me about that price is that it isn't 999.99 like you'd expect. No, the Donald isn't going to fuck you like that. It's 999.00 instead. you SAVE that ninety nine cents to probably buy some buns with, because while you can buy Donald Trump's meat, you can't buy his buns.

Now, I did some research because I'm a researchin' kind of guy. I wanted to know what else I could buy for a thousand dollars. Sure, I can buy a few steaks, but that seems expensive. So I found the Ebay for cows! E-buy a cow today at cattlerange.com. Now, on that page, you'll notice a ton of listings for cattle as apparently farmers use the internet now. You can buy oh...

You can buy a whole damn living angus cow for that, ONE THOUSAND POUNDS OF MEAT... and still have 124 bucks left over to oh, I don't know... BUY ANYTHING BUT A BUNCH OF STEAK OFF FAKE HAIR GUY. I said a bunch? No, I meant a little, because if you offered Donald Trump a mere 124 bucks for his meat, he'd probably put your lights out and steal your f'n girlfriend, mate! You don't insult him with petty change!

I really don't understand rich people sometimes, or I guess people who are semi-rich and want to act rich because they can buy meat at the Sharper Image, which... don't even get me going on that, it's like buying a laptop down at the best meat market here in Portland, Gartners! You don't do that. Nor do you walk into an electronics shop to buy any sort of beef or... you don't buy beef at an electronics shop. We can all agree on that. Everyone can. I think.

Except, I guess, for the cruel people whom invite their friends over to eat for the sole purpose of being able to blurt out in the middle of the meal... "Oh, and by the way, you're actually eating Donald Trump's meat right now, thought I should let you know."

Because those are some really fucking sick people.